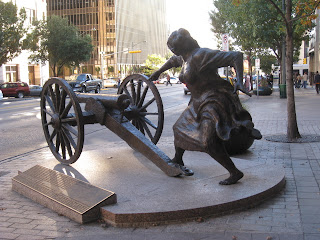 A seven-foot tall and 2,200-pound bronze sculpture of a woman shooting a cannon stands on Congress Avenue between 6th and 7th Streets.  Her name is Angelina Eberly, and her act hails from the pioneer days of the new Republic.  This statue has been an iconic Austin treasure since Sept. 2004.

The interim presidency went to Mirabeau Lamar and in 1839 he established Austin as the capitol of the new Republic.  This didn't sit well with Sam Houston.

In the middle of the night in 1842 during the second Houston presidency, Sam Houston attempted to forcibly move the capitol from Austin back to Houston.  He sent the Texas Rangers to Austin to steal the government archives,

It was night time, and Angelina Eberly, a local innkeeper, heard a noise.  She discovered the Texas Rangers loading their wagons.

She ran to the center of town - now 6th and Congress - and shot the town cannon.  She missed hitting the Rangers but successfully blew a hole in the old General Land Office three blocks away.  (The new GLO, which was built in 1857, still stands today, unharmed.) The populace was roused from their sleep and the Texas Rangers, who had made it as far as Brushy Creek, were successfully chased down.  The records were apprehended and returned to Austin.  Angelina Eberly had saved Austin as the Capitol of Texas.

The artist Patrick Bruce "Pat" Oliphant is the sculptor for this magnificent piece.  It was donated as a gift to the City by Capital Area Statues, Inc., (CAST), the folks who also brought us the Philosophers' Rock at Barton Springs Pool.  CAST is a non-profit organization dedicated to celebrating the history and culture of Texas through highly original works of monumental sculpture.

ATXPress has also created these short movies about Austin